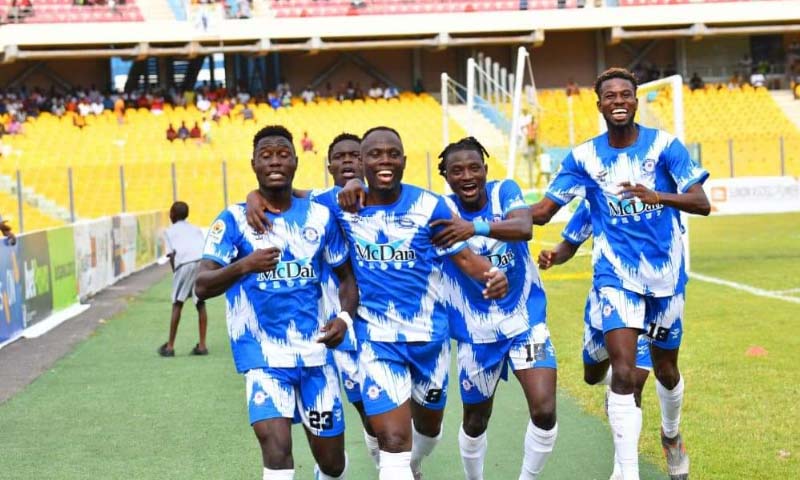 On Farmer’S Day December 7, Accra Great Olympics will confirm an official sponsor’s relationship with logistics giants McDan Group for the next three years.

The deal is also performance-based as there will be substantial increases in the package if certain key achievements are made in Ghana and on the continent.

McDan Group’s interest in supporting the club in a big way was shown some months ago when Olympics played Hearts of Oak in the Accra derby, during the second round of the 2020/2021 season.

Its Executive Chairman, Dr Daniel McKorley together with some notable supporters and board members of the club, Mr Humphrey Williams, Lawyer Frank Davies and Lawyer Gabby Asare Okyere-Darko put together a winning bonus package of GHC 90,000. However the game ended in a 1-1 draw.

Mechanics of the deal

The Accra based club can make up to top $270,000 every football year based on key conditions.

The club is to earn a package of $100,000 from McDan Group every contract year with an amount of $50,000 being advanced immediately after signing.

Olympics, who are currently fifth on the league log, will also receive $100,000 from McDan if they manage to win the Ghana Premier League (GPL) this season.

Joy Sports also understands that the package will be cancelled if the Accra based-club slump into relegation.

Added to all these is the clause to build a $10 million-worth stadium facility for the club if they are able to win the CAF Champions League.

Dr Daniel McKorley and his outfit has been a known supporter supporter of sports for years and have also made some major strides.

First of them is the organization of the McDan Open Tennis Tournaments which have now been certified by the International Tennis Federation.

At about three occasions, the McDan Group Executive Chairman, Dr McKorley also bailed out the Ghana Tennis Federations from bans from membership of the ITF following arrears of yearly membership’s dues. He supported the federation with various amounts in excess of $30,000.

The McDan Group has also supported the National Junior Tennis team with a mini bus and monetary sponsorship for various tournaments which has also earned results. Ghana is now a dominant force in the African Junior Tennis championship as well as the West African Circuit.

Another sports franchise established by the Group is the McDan Amateur Boxing Series which has been staged in communities to mark festivals and key national milestones.

They include the Independence Edition held in Tamale after the first Independence Parade in Ghana history to be held there and the Special Asafotufiam Festival in Ada, the town from where Ghana’s first boxing world champion D.K. Poison (David Kotei) hails.

The McDan Group also puts together one of the biggest competitive community football tournaments which include the McDan Gadangme Cup for coastal communities in the Greater Accra Region and the McDan Peace Cup.

The signing ceremony is expected to take place at the Accra Metropolitan Assembly.

This is the tool we can't live without - creation of tutorial videos with @talkingdeck is a breeze, right out of… https://t.co/yucyIgAvVb

🥁Just launched a new plugin!🎉 It's a great tool for automatic generation of social media images. 👉Go to Codecanyo… https://t.co/o4164mnbgo